Italy is a country whose name cropped up right at the beginning of the global COVID-19 pandemic. It was a country that went through the chaos of hitherto unimagined regulations and changes in social interaction. Through this article, we wish to focus on possible additional elements could have built a stronger case for the Italian Government’s public appeal for Social Distancing apart from discussing why the country became the epicenter of COVID-19. These additional elements touch different Design Thinking Tools that we focus during the course of our workshops.

Italy has become the epicenter of COVID-19. On 29th March, the nation crossed a landmark of 10,000 casualties; the highest in the world and the number of confirmed cases has touched almost 1 Lac with mortality rate of more than 9%.

Let us look at a few prime reasons behind why Italy has been hit so hard.

1) The Demographics: Italy has the 6th longest life expectancy in the world with average life expectancy of 84 years. As of 2018 census, around 22.6% of the population was above the age of 65 years. This is the highest in Europe. Most medical experts opine that senior citizens are more vulnerable to Corona virus than other demographics. It is also a well known fact that the public Healthcare system in Italy is one of the most sophisticated systems in the world, enabling the elder population prolong their life. Surprisingly according to an OECD survey (Organisation for Economic Co-operation and Development) in 2019, the average workplace retirement age in Italy is around 67 years. This means the elderly are in greater contact with the public at the workplaces than probably in other countries around the world.

2) Population Density: Italy is also one of the most densely populated nations in Europe with an average density of 533 people per sq mile compared to Germany’s 235 and USA’s 94. The numbers are higher in urban areas where about 5800 in Rome and in Milan around 19000 Italians stay in one square mile. It is worth noting that Milan is the capital of Lombardy province which is the most affected province in this pandemic.

3) Commercial: Northern Italy, which also houses Lombardy, is the commercial hub of the nation. North Italy is home to the headquarters of many major corporations and is closely knit with China from where the pandemic began. According to The Guardian, North Italy accommodates around 50% of the entire Chinese working population which is in couple of lakhs. A huge chunk of the Chinese immigration population works in the textile and fashion business. Leading designer brands such as Prada, Armani, Benetton and Gucci are housed in Northern and North-Central regions.

To ease commutation of the working population back to their native region, Italy was one of the first nations in Europe to kick-start direct flights to China and commercial flights specifically to Wuhan. Wuhan is considered to be the origin of COVID-19.

4) Cultural Factors: Let us look at the cultural factors of Italy that is hinge of our article. Italians are typically known for their cheerful and socializing behavior. They are physically affectionate people where Hugs and Cheeks are a usual phenomenon not only in family circles, but even at workplaces. Traditionally, Italian culture’s psychological perception of personal space is smaller than in other countries. The “Socially accepted distance” is very less in Italy compared to other cultures. The following graph suggests how the distance is compact even when it comes to strangers. 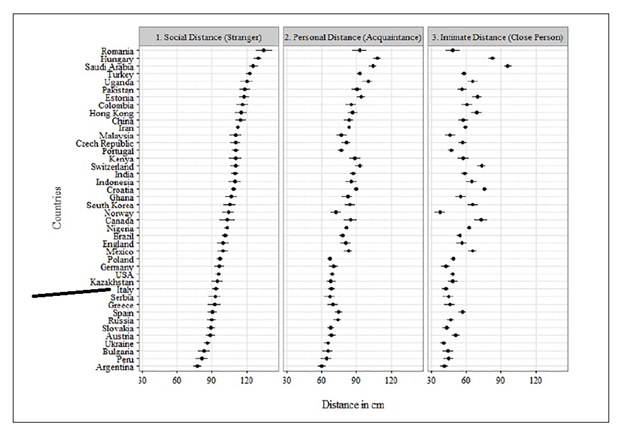 La passeggiata: In this generation of gadgets and devices many Italians still religiously follow the custom of ‘la passeggiata’, which translates to having an evening stroll. In this traditional custom, Italians, usually in late afternoon or early evening, take casual strolls across the street to greet and express courtesy with neighbours and acquaintances. This also becomes a great opportunity to catch up with them to exchange information, news and make new connections as well. Italians see this as a well known way to socialize.

Andiamo a fare qualche vasca: This phrase literally translates to “Let’s do some laps”. More famous among men, this activity is also followed at workplaces to ease stress and mingle with colleagues.

These practices reveal that Italians are more socializing compared to most other European nations.

Let’s look at a few points.
Defiance of Social Distancing: In an interview to the Italian daily, Corriere, in March, the Governor of Lombardy, Attilio Fontana, lamented the violation of Social Distancing by the citizens despite repeated appeals by the government. To quote him, “On one hand, I see people going out for strolls, on the other, I see people who can’t breathe anymore.” To quote a leading Italian newspaper, ‘Il Sole 24 Ore’ the Ministry of Interior even mooted the drastic step of increasing the fine for violators up to Three Thousand Euros.

Fervent Appeals by Lawmakers: Lawmakers also made repeated appeals via their Social media channels to thwart socializing. Here are a few snippets of the same from their posted videos. From left to right : Mayor Massimiliano Presciutti, President of Campania region Vincenzo De Luca and Antonio Decaro, the Mayor of Bari.

An ill-timed anti-racial campaign? : In the month of February, as news of COVID-19 wreathing havoc in China began to surface and with medical experts explaining the possibility of the virus being contagious through physical contacts. Tighter airport screening and quarantine measures began at many places across the world. Unfortunately, Chinese population across the globe too became a vulnerable target of racism. To highlight solidarity between the Chinese and Italians, the Mayor of Florence initiated a “Hug a Chinese” campaign. 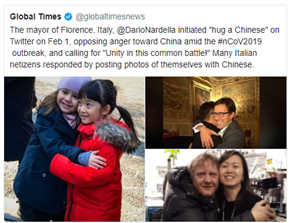 This campaign was a huge hit. However, Florence which is the capital of Tuscany province is also one of the severely affected areas of the pandemic. In retrospect, this campaign may sound ill-timed.

We can quote many such incidents. However, to summarize, we do get an understanding that despite repeated appeals by the government, the citizens didn’t get the spirit of Social Distancing.

What Design elements may have helped? We feel that a few elements of Design Thinking, in particular Empathy, Persona and Storytelling, would have made the government’s appeal of lockdown more impactful. Design Thinking, being a human-centered, future focused approach, keeps the human being and his experiential/aesthetics requirements at the center. Empathy is the hinge of Design Thinking – Putting ourselves into the shoes of others. Storytelling is not only about conveying content, but in understanding the Persona/Personality of the audience. Imbibing empathy towards the audience helps us to visualize the appropriate Persona of the audience with whom we want to communicate.

How would the persona of a typical Italian come across? A typical Italian citizen socializes more, mingles more at the neighborhood and at workplaces and comes across as an extrovert. These traits have been passed on across generations and have become way of Italian life. Fighting against the pandemic requires qualities exactly opposite of this The citizens needed to adapt to a drastic lifestyle.

How could the communication have been? Since there was expectation of a radical change in lifestyle for couple of months, could the televised addresses/appeals by the lawmakers/leaders have included an indirect AS IS (How are we?) versus TO BE (How we request you to?) message? The ‘AS IS’ ahoulduld have stated how Italians are more social, how they interact with people and then the speakers could have move ahead to the ‘TO BE’ phase in which they could have spoken of Social Distancing. The leaders could have stressed on the importance of this lifestyle change albeit temporarily.

A direct communication with regard to such change may come as a shocker for anyone. However, had the leaders appreciated the current way of style first and then gone ahead with the need of Social Distancing, recipients may have received the message of a ‘public figure with the understanding that their lifestyle and culture’ and that the leadership wants a change from within. The speaker hits the tone of “Relatability” with the recipients and then he/she can justify the necessary change substantiated with facts and figures.

In our Design Thinking workshops, we teach our participants about understanding the Persona of the audience. We ask them to ponder over indicative questions such as,”Why should the audience develop a ’buy-in’into a proposition? If the proposition is going to be radical one, what are the plans that are going to counter questions that will be triggered?” We teach our participants to generate answers for such questions by teaching them the importance of “Empathy” that forms the crux of Design Thinking.

School of Design Thinking is committed to creating awareness in the society at large about Design Thinking as a Human-centered Approach for problem solving, thus enabling ordinary people to do extraordinary things.